19 Jewish Quotes that Call for Racial Justice and Protest 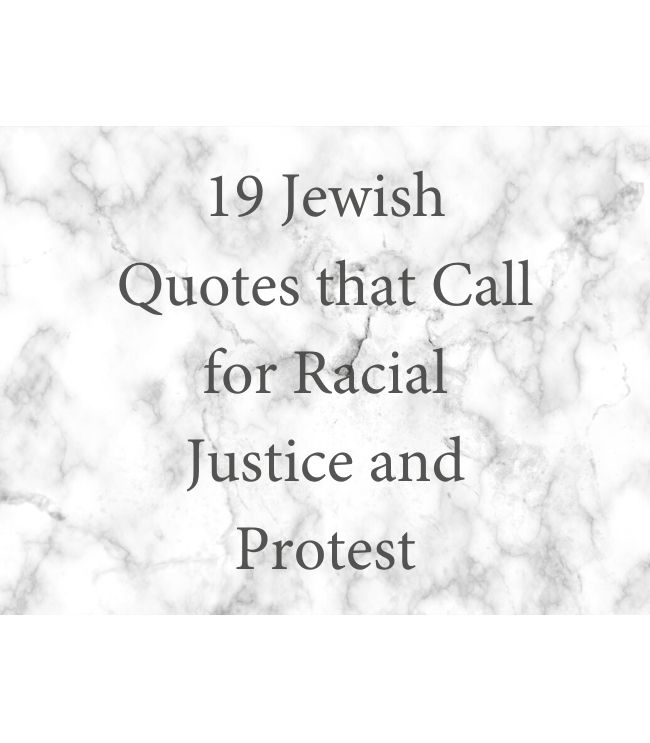 Here are 19 Jewish Quotes that Call for Racial Justice and Protest.

Jewish voices have a long history of demanding justice for the poor and oppressed. Prophets in the Tanakh often appeal to the memory of Jewish oppression in Egypt, and demand that the Jewish people do better for the oppressed in their land.

Hate evil and love good, and establish justice in the gate… Let justice well up like water, righteousness like an unfailing stream.

The Talmud and other traditional rabbinic texts also remind us that we have an obligation to speak up when we see injustice in our community.

At a time when the community is suffering, no one should say, “I will go home, eat, drink, and be at peace with myself.

“You are not obligated to complete the work, but neither are you free to desist from it.” – Pirkei Avot 2:21

Another essential Jewish voice, Maimonides, insists that we can combat our own ignorance and hate.

The remedy for our disease lies with us. Just as our failings stemmed from our own free will, so do we have the power to repent of our evil deeds.

All the evils that men cause to each other because of certain desires, or opinions or religious principles, are rooted in ignorance. [All hatred would come to an end] when the earth was flooded with the knowledge of God.

Likewise, Jewish leaders have been a voice for change in recent times. Rabbi Abraham Joshua Heschel marched with Martin Luther King Jr. and worked closely with him to advance the civil rights movement. For him, this kind of protest was a holy experience and a divine calling.

For many of us the march from Selma to Montgomery was about protest and prayer. Legs are  not lips and walking is not kneeling. And yet our legs uttered songs. Even without words, our march was worship. I felt my legs were praying.

There is nothing new about this kind of civil disobedience. It was evidenced sublimely in the refusal of Shadrach, Meshach and Abednego to obey the laws of Nebuchadnezzar, on the ground that a higher moral law was at stake.

When we hear and accept what we hear without meeting others, without asking how can it be, without looking for friends outside our circles, when we accept hatred for a group as a legitimate discourse – Pharaoh is alive and well, inside ourselves.

Martin Luther King Jr. himself talked about the unique connection between the Jewish experience and the African-American experience.

My people were brought to America in chains. Your people were driven here to escape the chains fashioned for them in Europe. Our unity is born of our common struggle for centuries, not only to rid ourselves of bondage, but to make oppression of any people by others an impossibility.

After the Shoah, prominent Jewish voices including Elie Wiesel and Yehuda Bauer committed to reminding the Jewish people to never stand by silently while others are oppressed.

I swore never to be silent whenever human beings endure suffering and humiliation. We must take sides. Neutrality helps the oppressor, never the victim. Silence encourages the tormentor, never the tormented.

Whenever men and women are prosecuted because of their race, religion, or political views, that place must–at that moment–become the center of the universe.

There may be times when we are powerless to prevent injustice, but there must never be a time when we fail to protest. – Elie Wiesel

Jewish women, too, have made their voices heard for the sake of justice.

Fight for the things you care about. But do it in a way that will lead others to join you. – Ruth Bader Ginsberg

One of the very first lessons of the Torah gives it a place of high priority: All human beings are created equal. This belief in equality compels action in response to discrimination, racism and racial injustice.

Ultimately these Jewish voices remind us that to love and revere God, we must condemn racism.

Racism is Satanism, unmitigated evil…You cannot worship God and at the same time look at man as if he were a horse.

Why did God create swarms of bees, prides of lions, herds of deer, schools of fish, and flocks of birds, and only one human couple? So that no one can say to another ‘My ancestry is superior to yours.

To love God is to recognize His image in a human face, especially one whose creed, colour or culture is different from ours.