6 Benefits of Ending My Vegan Diet During Pregnancy 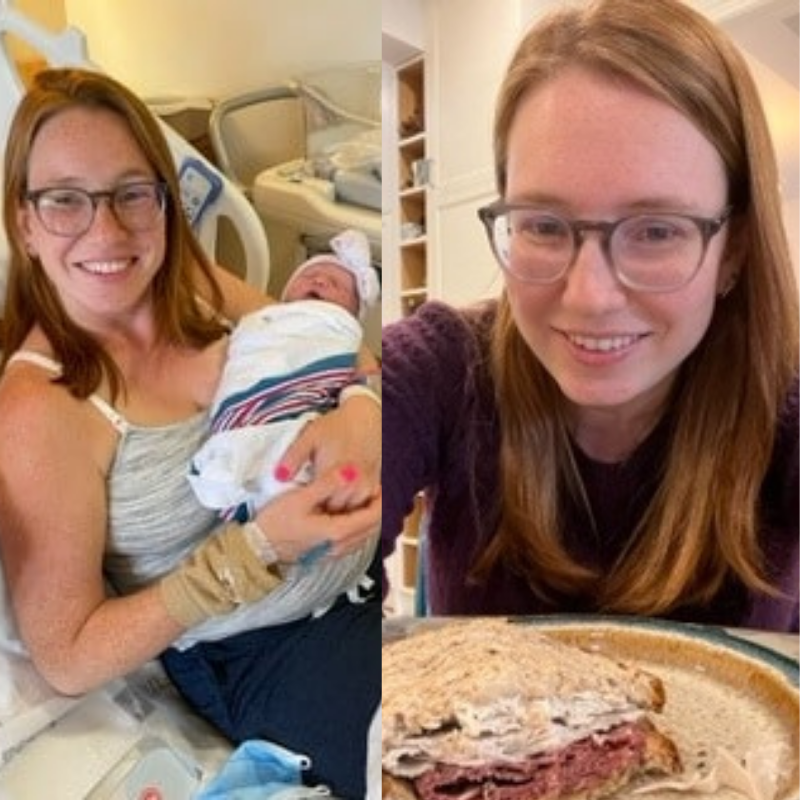 Erica decided to move beyond veganism during pregnancy, a time when the body goes through a significant transformation.

I met Erica online when I shared my blog post, Extreme Veganism: Why I started Eating Meat After 20 Years. She responded, “I recently started eating (kosher) meat again after 25 years of strict vegetarianism/borderline vegan”. Her comment made me feel supported and also curious to learn more about her experience.

Most people make some changes to the way they eat during pregnancy. They might be responding to a combination of medical knowledge, nutritional needs and physical cravings – or indeed aversions. Whether it involves taking vitamin supplements, cutting down on caffeine, or suddenly eating things you would never usually dream of, pregnancy and dietary modification seem to go hand in hand.

Adhering to veganism during pregnancy is of course possible and many people enjoy it. My goal here is to make space for people to share real stories about dietary choices and change without shame or judgment. May we all learn something from Erica’s experience.

Welcome, Erica Cohen! Thank you for sharing your experience of veganism during pregnancy with us today.

Thanks for having me on your blog! I was so moved to read about your journey because it resonated so deeply with mine. Just about a year ago, nearly 25 years into being a strict vegetarian, leaning vegan (no leather!) I made the conscious decision to start eating meat again It’s certainly been a journey!

Just now as I heated up my lunch of chicken soup, I thought “it still feels unrecognizable to me that this is the way I’m eating, nearly a year in.” I feel good about my decision and my daily food choices, which often do include animal protein. Yet still, having lived a certain way for 25 years has an impact that is difficult to overcome!

Can you tell us a little more about yourself?

I’m a New Yorker, born in Manhattan and lived in the Village as a child – we were even downstairs neighbor to Billy Idol. I grew up mostly in Westchester before coming back to the city to attend NYU for college, where I met my husband. Since then, we’ve lived all over the city. Two years ago, we settled on the Upper West Side with our three young children (Benji, 6.5, Margot, 3.5 and Eva, 4 months). We spend most of our free hours in the Central Park playgrounds and exploring the Museum of Natural History.

Tell us about your passion project

By day, I’m the director of a program called the Center for Youth Philanthropy and Leadership at UJA-Federation of NY, and I’ve been at the organization for 10 years. My work engages Jewish teens in philanthropy – starting from their becoming bar and bat mitzvah and through high school. Our high school teens learn what it means to engage in the philanthropic process – they learn about community needs and determine their collective values that will drive their work for the year. Then they fundraise and make allocations to social service organizations that address their collective mission statement. Last year, during COVID, the teens met virtually and raised and allocated over $150,000. In total over 10 years, they have allocated almost $1.5 million.

I believe these teens are changemakers and are making an incredible impact while learning valuable life skills at such young ages.

By night, when I’m not elbow deep in parenting, I’ve started making challah creations. I’ve been making challah for many years but during the pandemic, I started making a variety of shapes for my kids to bring a little extra joy and it’s morphed over the last year and a half! It’s a wonderful release for me to be able to dream about these challahs and then have them come to life on our Shabbat table! You can see some of my creations on Instagram: @ericaavin.

Tell us about when and why you became vegetarian or vegan

I’ve always been sensitive and cared deeply about animals. As I began to understand the world, I became more and more uncomfortable with the idea of eating animals. Shortly after my 11th birthday, I decided that I would try to be a vegetarian. From that first day, I never looked back and it became an integral part of my identity.

I decided that “all or nothing” was the best route for me and didn’t want to eat or use any products where the animal had to die – so I didn’t wear or buy leather, and I cycled through periods of cutting out eggs and dairy. Very quickly I found that there was really no question about this decision, it just made sense for me. If you would have asked me to identify myself in three ways for most of my life, I probably would have said: Jewish, mother and vegetarian.

Looking back, I’m glad I stuck with my intuition at the time and followed what felt right. It wasn’t easy to be a vegetarian as a child in a meat-eating world or in the 90s, but I strongly believed in it and wanted to see if I could do it. I’m proud of my childhood self for going for it.

What really worked for you on your vegan diet?

I felt really good about my decision – it felt ethical, resonant and authentic.

When I was a child and just starting out (aka not a particularly adventurous eater), consistency was crucial – we found a few things that worked and stuck with them. My mom was also incredibly supportive, and she helped me find resources to understand how to be a healthy vegetarian and find balance – we actually found a book about being a vegetarian for children!

As time went on, blogs and cookbooks became my best friends, trying new recipes and having access to a plethora of new ideas. Finding a partner who was interested in a variety of foods and happy to eat mostly vegetarian food was critical as we built our home together. I appreciated that he wasn’t one of these “meat for every meal” kind of people.

Can you tell us about your experience of veganism during pregnancy?

Early on in my recent pregnancy, I was still a vegetarian and not considering otherwise. I found I was craving bread products with more frequency – like, I could have eaten bagels for three meals a day. While that’s somewhat acceptable early in pregnancy, I also didn’t feel good eating that way. My body felt sluggish and undernourished. I felt like something was amiss with my veganism during pregnancy.

After attempting to course correct, I found that neither my cravings nor my overall general feeling was much improved. I generally felt like something was out of whack and I wasn’t able to address it using the tools that I was used to. I even went to see a nutritionist who evaluated my food log and said it was more or less on track.

But I still felt like something was missing, which is when I started listening to the feeling that I needed meat. If I had to do it over, I would make the same decisions!

What was the hardest part about starting to eat meat or dairy products when you transitioned from veganism during pregnancy?

The emotional hurdle was by far the hardest part. I had been a vegetarian for so long – anyone who has known me since childhood knows this about me. It was, so I thought, an integral part of my identity. For many months I actually didn’t tell people – I was… embarrassed? Uncertain? And constantly met with shock!

Honestly, I don’t think I admitted it to myself that quickly. The first time I kind of enjoyed eating meat I almost felt ashamed. I definitely cycled through a bit of an identity crisis.

What was exciting about changing away from veganism during pregnancy?

The range of foods that became available to me! I felt like I was exploring a whole new world of food, finding out what I like and don’t like, and finding new ways to be creative. Alongside all of that, there was also just the simple fact of having more options.

How did others react, if at all?

Pure shock. There really is no other way to describe it!

How are you physically feeling now you eat an omnivore diet?

From the first day, I felt better, like I was really listening to my body and feeding it the fuel it truly needed. I was very nervous about getting sick or having a physical reaction to meat after not having it for so long. This was especially important to me as I made the change from veganism during pregnancy. But I didn’t have any adverse effects at all.

Since you started eating meat and dairy products, what are 2-3 of your favorite recipes?

Now, what are your thoughts about creating a diet and healthy lifestyle for yourself and your family?

It’s so much easier and less wasteful to make one meal that the whole family can eat! I also feel better about eating the same things as my children. I’m showing them the diversity in what I cook and eat and leading by example. I rely far less on pastas as a main dish and overall, there are fewer leftovers, and far less waste.

Veganism during pregnancy did not work for me personally. Even now that I’m four months postpartum, this continues to feel like the right path for me. It is also important to teach our children about kashrut and keeping an intentionally kosher home. Our mealtimes are sacred and we often have conversations about the food we are eating. While I’m not saying I’ll never go back to veganism or vegetarianism – even now, my brain can’t really comprehend that I eat meat – I feel content with my daily decision

Summary of 6 Benefits of Ending My Vegan Diet during my Pregnancy: