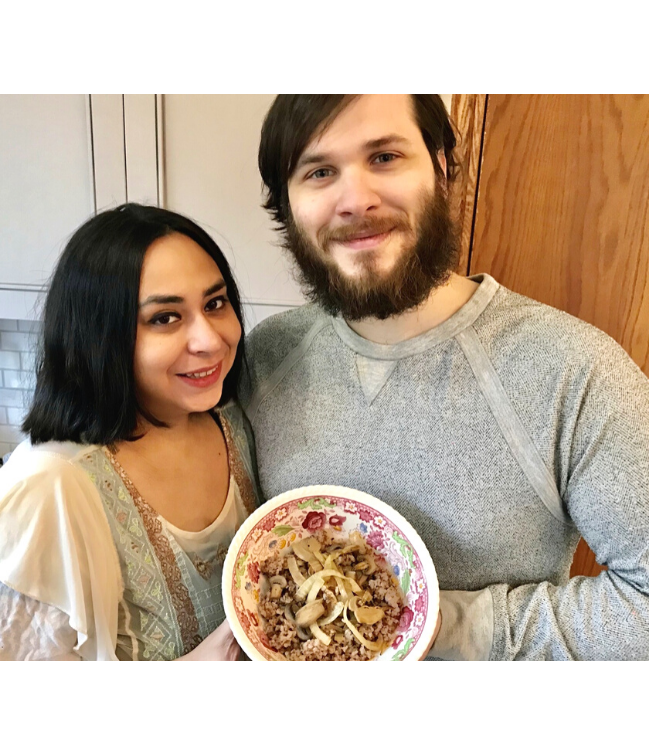 This Community Recipe comes from Alexandra and Jacob. Kasha is a classic dish, made from adding toasted buckwheat to boiling water to make a satisfying savory porridge. Topped with sauteed onions and mushrooms, this is a perfect meal when you need simple, comforting food.

All about Alexandra Corwin and Jacob Zobel

Alexandra and Jacob are a married couple rooted in love, reading, tikkun olam, music, Judaism, and veganism. They are new parents to their 7 month old daughter and are raising her vegan. This family loves cooking and looks forward to inviting friends over again for shabbos dinners, post-Covid!

Based in Chicago, Alexandra and Jacob are both in education. Jacob is a special education teacher and Alexandra works in educational leadership and leads diversity, equity, and inclusion work.

As a little girl Alexandra remembers her late grandfather Henry cooking kasha for the family. When she met Jacob she introduced him to the wonders of kasha. Jacob then adapted Henry’s original recipe and made it even more delicious! Now, Alexandra and Jacob serve it when they need a quick and filling meal, often with homemade bread. Family members who have eaten this dish compliment the flavor of the onion and how it works well with the kasha.

What exactly is Kasha?!

Quite simply, kasha is toasted whole buckwheat grains. Toasting is an important step as it halves the cooking time compared to raw buckwheat. Often thought of as a cereal grain, buckwheat are actually very starchy seeds. It’s possible to grind them down to make flour, or cook them whole – just as they are here in Grandpa Henry’s New Kasha.

Sometimes we all need a little inspiration to mix up our regular recipe rotation. Our Community Recipes feature is for just that – to share our favorites and hear from a variety of people in our community.  Since you’ve read Alexandra and Jacob’s, do you feel inspired to share your own recipe? Don’t forget to get in touch to share your vegan recipe too!