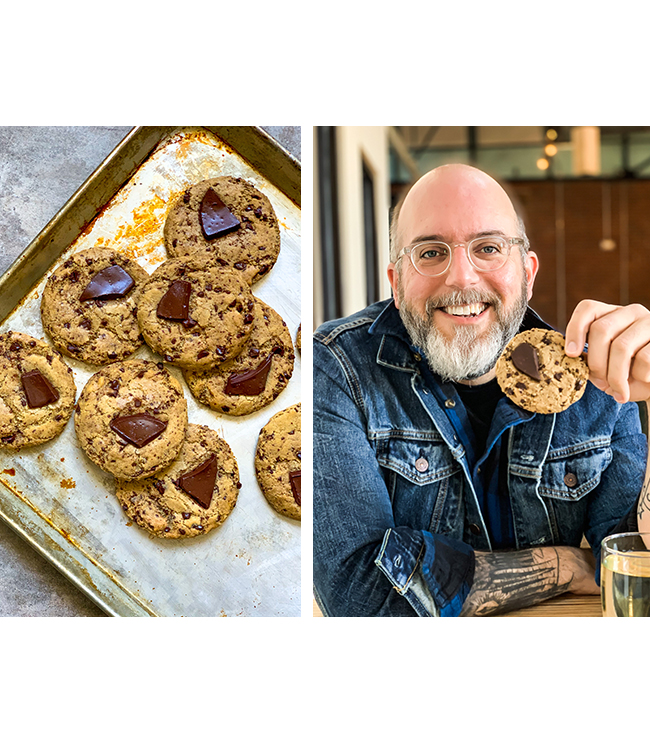 Tell us about yourself, Benjamin Plante

I’m a clothing designer for a national brand and I’m really passionate about cooking. I went to culinary school on a spur of the moment during my quarter-life crisis. While in culinary school, I also followed my heart and converted to Judaism, a path that I started in my early 20s.  As a convert, I’ve had to seek out my Jewish family/identity and food has always played a major role in creating my Jewish community experience.

Benjamin Plante is not a Vegan (and we love him still)

Although he is not a practicing vegan, we love him still!  Benjamin makes vegan recipes often and is always looking for inspiration for alternatives to classics that might suit others in his life. He runs a food blog as a way to keep his mother up-to-date on his “daytime drama”.

Benjamin also posts beautiful photos on his Instagram account.  His bio reads “Shalom Y’all – Emotionally eating my way through life. All my photos. All my feelings.”

The best baking happens when he needs all three: to feed himself, to soothe himself and to be creative.

Lily’s Sea Salt Extra Dark Chocolate  – This no added sugar dark chocolate bar is used as a garnish but also for that extra punch of chocolate that we all love.

Lily’s Dark Chocolate Baking Chips – These no added sugar dark chocolate baking chips set the base for this not too sweet treat.

Spectrum’s Refined Coconut Oil – This cold-pressed coconut oil is great for baking when you don’t want that hint of coconut. If coconut is not your thing, try this neutral tasting high-heat cold-pressed canola oil.  It’s perfect for baking cookies.

If you want to make a gluten-free version of this recipe, Benjamin recommends this gluten-free flour (it is not vegan).

Benjamin’s Vegan Sea Salt Dark Chocolate Chip Cookies have gotten positive feedback from friends, we hope you love them too.

Here are some other favorite Jewish Food Hero community recipes.

Jacqueline’s Raw Raspberry Lemon Meltaways are a vegan gluten free treat that are packed with natural, plant-based protein and healthy fat in the form of almond flour and shredded coconut, meaning they will provide longer lasting energy too.

Leah’s Triple-Almond Biscochos are sweet, gluten-free, oil-free and vegan.  They are a healthy adaptation of the beloved sephardic Jewish biscochos cookie.