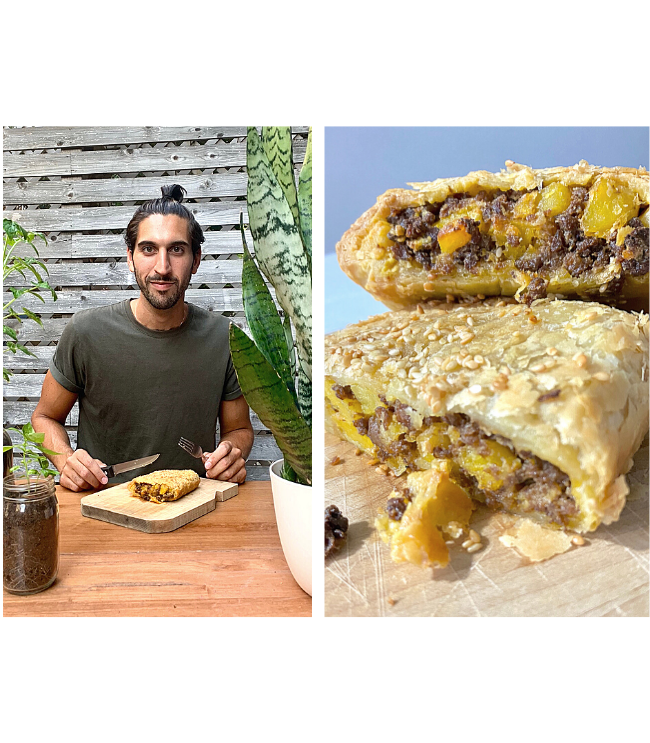 This Community Recipe is David’s Vegan Bourekas. These delicious puff pastry parcels are filled with a mix of vegan cheese, meatless ground beef, onion and potato.

All about David Mishael

David was born and raised in NYC on the Lower East Side, where he currently lives today. He began to help his mother cook dinner for their family at a young age, and was soon prepping and cooking dinner for his family on his own. Cooking makes David feel passionate and creative. He is also an avid runner, running 25-30 miles per week. He was supposed to run the 2020 NYC Marathon, but will run in 2021 because of the Covid-19 race cancellation.

After graduating from Boston University, David got his first corporate job. A few months in, he was looking to boost his health and energy to help him stay well in a fast-paced lifestyle. He tried a few different changes to diet and exercise, but nothing made much difference. That was until he decided to go vegetarian, which very soon turned into vegan. David felt such improvements in his general health, as well as his energy levels, that he decided to follow a vegan way of eating for the long term.

Turning a passion into a business

Four years later, David had been cooking vegan pizzas. His girlfriend Zoe Arbel entered David’s creations into a Pizza Making Contest. Finally, David’s pizza won! As a result, he was inspired to continue his culinary journey. With the help of Zoe, @PlatesbyPlantDaddy was born, and Plant Daddy Plates Inc. was formed.

At the moment, David and Zoe are whipping up vegan prepared meals, based on non-vegan dishes David grew up eating. Right now, they are mostly cooking meals for friends and family while working on expanding. They plan to spread the love of vegan food to more people in the near future.

For cooking inspiration, David turns to:

Thug Kitchen: The Official Cookbook: Eat Like You Give a F*ck

101 Things I Learned® in Culinary School

David grew up eating bourekas. His paternal grandparents arrived in the US from Israel in the 1960’s. It was a dish his grandmother was reluctant to teach her American daughter-in-law to make. But, she eventually did. David was always excited when his mother cooked bourekas, and helped out whenever she’d let him.

When David stopped eating meat, he really missed eating his mother’s bourekas! So, he decided to create a vegan version. David’s Vegan Bourekas recipe has been a hit at multiple Shabbat dinners. Except for one time… when it caught fire in the oven and set off the building alarm because he didn’t realize it was on broil the whole time…

David’s Vegan Boureka’s recipe calls for Daiya Cheese Sauce, a rich, creamy, liquid vegan cheese sauce. If you prefer to make your own, it is simple! Try this recipe which uses nutritional yeast flakes and dijon mustard to get a deep, tangy cheese flavor.

This mock ground beef product is vegan and made from soy protein with various flavorings. If you prefer, you can make a plant-based or homemade alternative. Try using green or brown lentils and/or finely diced mushrooms and flavored with vegan bouillon granules and concentrated tomato paste.