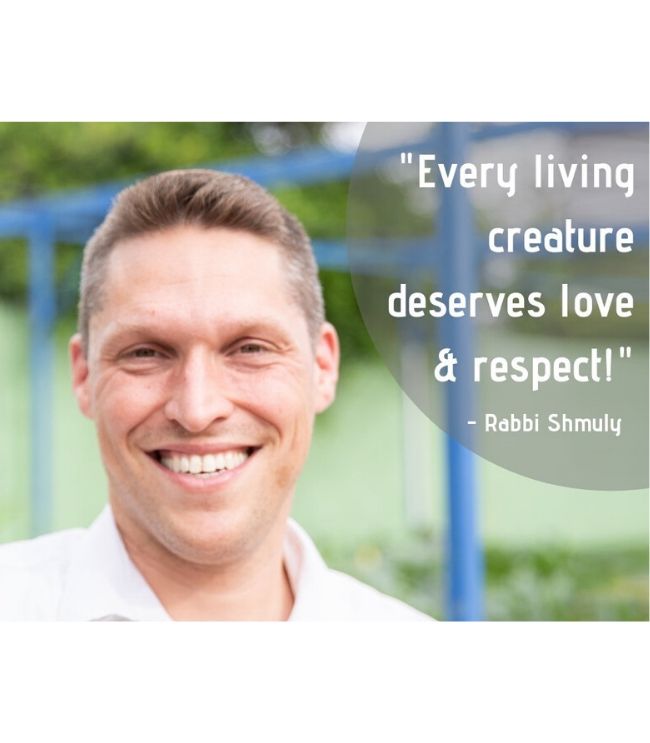 I am honored to share this interview with Jewish Animal Welfare Expert Rabbi Shmuly Yanklowitz. May this interview allow you to learn more about Jewish veganism and Jewish ethics about animal welfare.

For those of you that do not know Rabbi Dr. Shmuly Yanklowitz he is the Founder & CEO of The Shamayim V’Aretz Institute, President & Dean of Valley Beit Midrash, and Founder & President of Uri L’Tzedek.

Rabbi Yanklowitz’s writings have appeared in outlets as diverse as the New York Times, the Wall Street Journal, the Atlantic and the Huffington Post, among many other secular and religious publications. Rabbi Yanklowitz is a sought-after educator, social justice activist and motivational speaker as well as the author of ten books on Jewish spirituality, social justice and ethics.

Why do food choices matter?

Food choices matter because they are the most consistent, ethical decision we make throughout our day; every day, we eat multiple times and what we choose to consume affects us. The other reason that our food choices matter is that it affects human health; this affects our well-being, our families. It affects workers, it affects animals, and, ultimately, it affects the environment.

You and your wife became vegan on your wedding day; what was important about taking this step as a couple?

We felt that our personal commitments were only sustainable if it was done in partnership. We wanted to build a home together that represented our values.

What are some highlights from Jewish thought about eating?

The main aspect of Jewish thought in the realm is that we are required by the tradition to make a bracha, a blessing, before every act of food consumption. That blessing is a moment of pause to connect spiritually, feel gratitude, and ensure that we’re eating and living by our values.

What are some highlights from Jewish law and Jewish ethics about health?

The Torah commands that we guard our health. The first commandment in the Torah is not to eat from the Tree of the Knowledge of Good and Evil.  The failure of Adam and Eve to obey this simple command in their consumption led to human mortality. The birth of moral consciousness occurred at the first act of food consumption in human history. It could be said that ethics and eating are more interconnected than any other act.

What are some highlights from Jewish law and Jewish ethics about animals?

In Jewish law, there is a prohibition called Tza’ar ba’alei chayim, that we should not be cruel to animals. Dozens of times throughout the Torah, animal welfare concerns emerge. Indeed, we pray to God to act mercifully towards human beings and we are to emulate that merciful Being by acting mercifully towards creatures ourselves.

How does Jewish law or Jewish Ethics influence your decision not to eat animal products (meat and dairy)?

There is a general Torah mandate to reduce suffering in the world. While Jewish law certainly permits the consumption of animal products, within kosher guidelines, it’s not clear that permission would apply to the horrific conditions of factory farming today. And it’s also not clear that it would apply under any conditions when we have alternative food sources as we do today.

What are the health benefits (physical/emotional/mental) you notice from abstaining from eating animal products?

I don’t experience any short-term physical benefits when I eat vegan junk-food, but when I eat a healthy plant-based diet (which excludes sugar and oil) then I notice a major impact. I have lost weight. I feel more emotionally balanced and happier and I am more spiritually rooted and aligned with my deepest values as a vegan.

What spiritual benefits do you enjoy from being vegan?

I feel most spiritually fulfilled when I feel that I’m taking strides in living according to my highest values. I feel closer to G-d when I emulate G-d’s compassionate ways.

Why did you start an institute to educate others about veganism instead of settling for just changing your own lifestyle?

We [The founders of The Shamayim V’Aretz Institute and I] realized that countless Jews shared the values of compassion and animal welfare but didn’t have consistent support or inspiration. We also realized that many had not been educated at all as to the Jewish positions on such matters. A movement that could really create change was needed.

What kind of resources does your institute offer for men and women who want to be vegan?

The Shamayim V’Aretz Institute offers many resources for those who want to deepen their commitment to animal welfare. We offer a campus fellowship for college students, host an annual spirituality retreat for people of all ages, host a variety of downloadable source sheets on our website which people can access for free, and we have a listserv for Jewish vegetarians and vegans to help them build community.

How can Jews who don’t want to be fully vegan help reduce animal suffering and improve their nutritional health?

Our primary education work is not about persuading people to follow a vegan lifestyle as much as it is baby steps towards meat reductionism. We are pro-vegan but understand and appreciate there are often many steps to be taken to get there.

What do you say to people who insist that Jewish people are religiously obligated to eat meat for Shabbat dinner, or during any other occasion?

It is clear from the halakhic (Jewish legal) sources that one who doesn’t get enjoyment from meat consumption is not obligated to consume it.

What are some ideas about food that are no longer serving us?

One idea is that authentic Jewish foods are the ones that our grandparents served us as kids. So, an authentic Jewish meal must include brisket, gefilte fish, and chicken soup for example. But the horrors behind their production—including factories that supply kosher meat all over the world — have been well-established at this point and aren’t serving ethically-minded Jews, and people generally, as they should be.

I dream of a day when the Jewish community is on the forefront of creating global change on this issue. That keeps me motivated in this work and informs my attitude towards continuing to educate and advocate on this critical issue.

For men and women who want more resources on this topic, what books would you recommend?

There a few books I would point people to. The first is Eating Animals by Jonathan Safran-Foer, an examination of how people are to reconcile with the phenomenon of eating animal flesh for sustenance. I’d also point to the work of Dr. Richard H. Schwartz, a leading thinker in the field of Jewish vegetarianism who wrote some of the definitive academic books on the subject, including Judaism and Vegetarianism among others.

Last year, I edited a volume of general thought titled The Jewish Vegan which includes many different perspectives of what it means to follow an intertwining path of Judaism and veganism. The book includes articles from thinkers and activists like Princeton Professor Peter Singer, actress Dr. Mayim Bialik, and HSUS VP Paul Shapiro.

Also, coming soon in the next year will be an academic work that I’m co-editing which collects essays from leading academics and further explores the intellectual realms of Jewish thought and vegan living.

A note from Jewish Food Hero

If you are feeling inspired by Rabbi Shmuly’s interview, but don’t know where to start, you’re in the right place!

Jewish Food Hero has a wealth of plant-based recipes on our site. The recipes are all simple, easy to make and delcious.