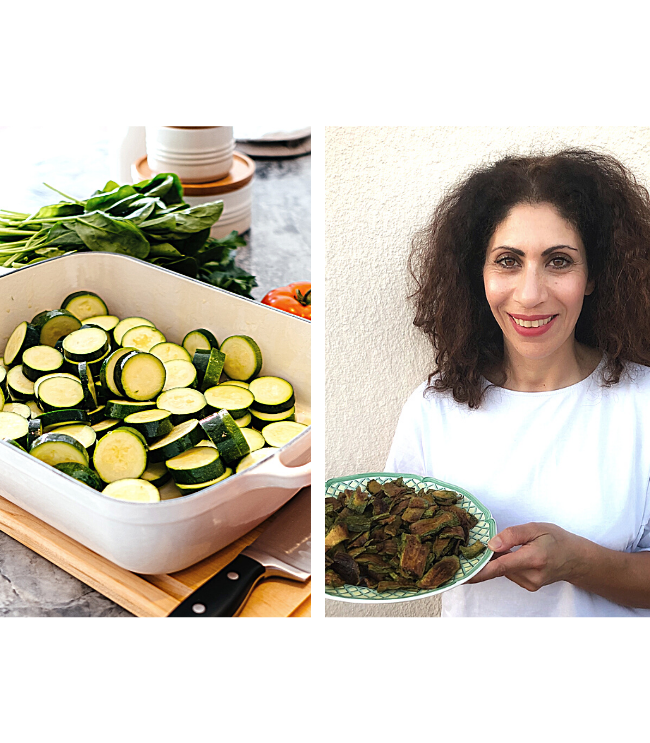 This Community Recipe comes from Irit Levy, a Jewish woman living in Rome. Irit’s Salty and Sour Marinated Zucchini Concia is a Roman Jewish fried zucchini dish. After browning in a hot pan, zucchini slices get their flavor from garlic, herbs and salt. A vinegar marinade gives this dish an intense flavor, drawing out the natural sweetness of the zucchini. Perfect as a vegetable dish for any table, and leftovers make any sandwich sing.

Community Recipes is a recurring feature where we share your vegan recipes on the Jewish Food Hero blog.  If you want to share a recipe in this series, pitch us your idea here.

Irit is a travel designer based in Rome. Irit’s parents are Israelis but she was born and raised in Milan. She lived there until she met her husband, a Roman Jew. After this, they moved to the “eternal city” where Irit worked for more than 10 years at the Jewish Museum of Rome.

In 2018 Irit founded The Jewish Life Experience. This is a professional travel company which offers tour packages, leisure, accommodation, events and Jewish tours in Rome and all over Italy. Through Jewish Life Experience, Irit ensures travel arrangements for individuals and families from the beginning to end, providing them with the best Kosher services and practical support during their stay.

Irit loves to cook and try new recipes which she finds on the Internet, especially via Instagram. But cooking together with her 14 year old daughter makes her happier than any other thing! Irit’s Salty and Sour Marinated Zucchini Concia is a great recipe to get kids to help with. The adults can take charge of the frying, but kids will enjoy laying the zucchini out to dry – encourage them to notice how the texture changes by taking a before and after photo. They can also enjoy layering up all the dressing ingredients.

Irit’s Salty and Sour Marinated Zucchini Concia is a typical Roman Jewish fried zucchini dish. This Italian dish is from the Jewish tradition in Rome. The recipe arrived with Sephardic Jews fleeing the Spanish Inquisition. For these fried and marinated zucchini, Romans use a fluted variety called “Zucchine romanesche”, but you can use your local zucchini. Concia never fails to delight on the Shabbat table! Why not try Irit’s Salty and Sour Marinaded Zucchini Concia this week?

The simple cooking processes involved in Irit’s Salty and Sour Marinated Zucchini Concia highlight the natural flavor of the zucchini, drawing it out with acid marinade. First, the zucchini is cut and put in the sun to dry, to remove excess moisture. Next, gentle frying turns it golden. Finally, garlic and fresh herbs add flavor. A vinegar drenching completes the dish. Importantly, leaving it to marinade for a minimum of two hours before serving intensifies the flavors. This also makes it an ideal make-ahead dish for Shabbat or any other meal.

Adapting the dish for low / no oil

If you want to reduce the oil content of Irit’s Salty and Sour Marinated Zucchini Concia, you have options. The raw zucchini slices could be lightly dabbed/brushed with oil before being placed in the pan. Alternatively, you could grill them. This would change the flavor and texture of the original recipe.

Our worldwide healthy food community has so many varied ideas to try! Have a look at these other submissions. And don’t forget to get in touch to pitch us your idea here.

If you like these vegan + Kosher Jewish Food Hero community recipes, you will love our cookbooks.

I don’t know quite what to call this book. It’s a cross between an inventive, thoughtful discussion guide on female characters in the Bible and a vegan cookbook. But I can say, is it’s beautiful!

Feeding Women Of The Bible, Feeding Ourselves has wonderful,lively descriptive discussions of some of the main women who appear in the Bible. The discussions are brief but intellectual and fun. The recipes are practical and useful and loosely tie in with the characters.

And the best part? All of the money made by the book will go to charity!

The photos in the book are splendid, rich with color and flavor. (Can a picture have flavor?) This is a book that you should consider buying as a household gift whenever you need one, because it is a cross between a coffee table book, a study guide, a charitable contribution and a recipe book. Who could ask for more?

A Modern Classic for the Jewish Library

Whether you are plant-based or not, it can be daunting to prepare a menu for the Jewish holidays. Jewish Food Hero recipes are delicious, interesting, and, most importantly, connected thoughtfully to the themes of each holiday. Rather than slaving away in the kitchen, each menu is simple, designed for a family get together, aided by a shopping list for a simple trip to the market. None of the ingredients are hard to come by.

Take the headache out of your holiday, and turn it into a moving and delicious experience. This is a modern classic for the Jewish library.