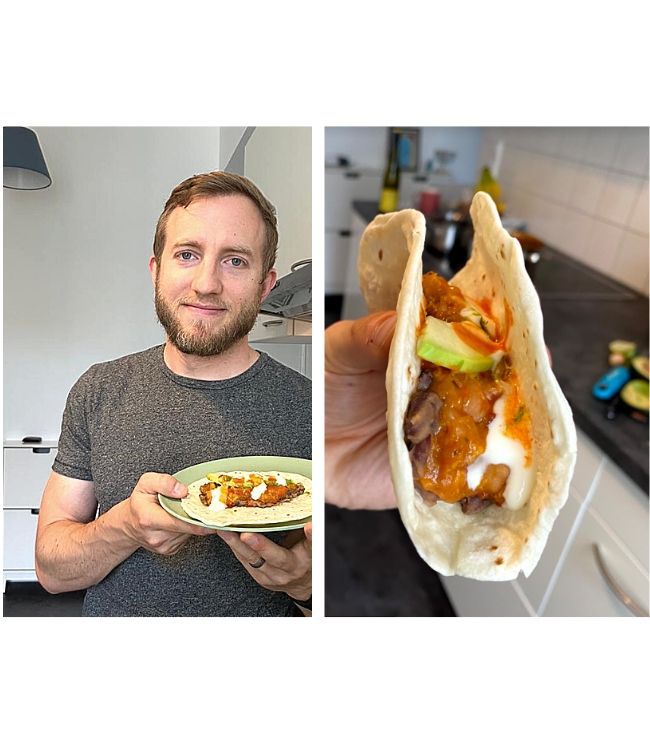 This Community Recipe is Joe’s Vegan Cholent Tacos. This recipe transforms a Jewish classic dish, adds spice and thickens the sauce to create an delicious and fun-loving taco filling.

Community Recipes is a recurring feature where we share your vegan recipes on the Jewish Food Hero blog.  If you want to share a recipe in this series, pitch us your idea here.  This series is all about sharing healthy plant-based and vegan recipes. We are creating a positive community around food and sharing.

All About Joe Baur

Joe Baur is a writer, filmmaker, and co-host of the Travel Tomorrow podcast from Cleveland currently based in Berlin. He’s the author of Talking Tico, detailing his year of living in Costa Rica and traveling around Central America. When he’s not braiding challah or running around Germany, he’s putting the finishing touches on his next book on his life in Germany, connecting with his Jewish heritage, and figuring out if the move has been worthwhile.

Joe is originally from a suburb outside of Cleveland and has now been in Düsseldorf for three years. He lives in Berlin with his wife Melanie and their dog, Moses. Relaxing is not Joe’s strong suit. He finds it difficult not to be doing something or making something. So relaxing means creating more projects, whether it’s working on a podcast, another article, or cooking.

When he wants to take his mind off things, Joe enjoys hiking or long-distance trail running. He is making an ongoing effort to learn Yiddish. He practices playing guitar and stumbles through Yiddish tunes, looking up words he doesn’t know.

Joe is a big supporter of low-fuss cookery! His and Melanie’s go-to meal during a busy week is a veggie burrito. Joe thinks this is essentially what Joe’s Vegan Cholent Tacos recipe is at its core. He says, “That with some cholula sauce on top will never get old!”

What is Joe reading right now?

‘Roads Taken: The Great Jewish Migrations to the New World and the Peddlers Who Forged the Way,’

How does Joe feel when he cooks?

Cooking makes Joe feel immense satisfaction and frustration. He had a hard time with using a fledgling sourdough starter to bake weekly challah because he couldn’t get yeast in Germany.

Usually he’s closer to satisfaction. He enjoys realizing he’s made something similar to what his grandmother used to make. Or, when he follows a recipe in a Jewish cookery book and experiences a new taste. In the end, cooking brings Joe closer to his heritage. There’s a hint of regret that he didn’t start exploring it earlier in life, but also gratitude that he’s doing it now.

A discussion on Twitter about cholent was the inspiration behind this recipe. Joe didn’t grow up with cholent. The first time he can remember having it was in Krakow’s Kazimierz watching a klezmer show. The cholent sounded good and like a reasonable antidote to the cold, March weather outside. It was delicious.

As an only occasional meat eater, Joe decided to create a vegetarian version. Initially, he ate it as a stew with challah. Then, he quickly realized that he could use the leftovers for burritos or tacos during the week. So, he started making it spicier. The result was pretty good and practical too. A typical batch of cholent can cover your burrito eating for days.

Joe first tasted Mexican food at Don Tequila in Mentor, Ohio when he was in junior high. This was an important experience for him. Thinking about the popularity of tacos and burritos in the USA made Joe reflect on the incredible contributions that Mexican immigrants make. This is something Joe always talks about when he talks about his Cholent Tacos. Joe’s Vegan Cholent Tacos is a combination of his upbringing – a Jewish take on a Mexican dish.

This dish is great served with refried black beans, a cool soy yogurt to balance out the heat from the cholent, lime zest, avocado slices or guacamole, and Cholula Hot Sauce.

1 can of diced tomatoes

Salt and pepper to taste