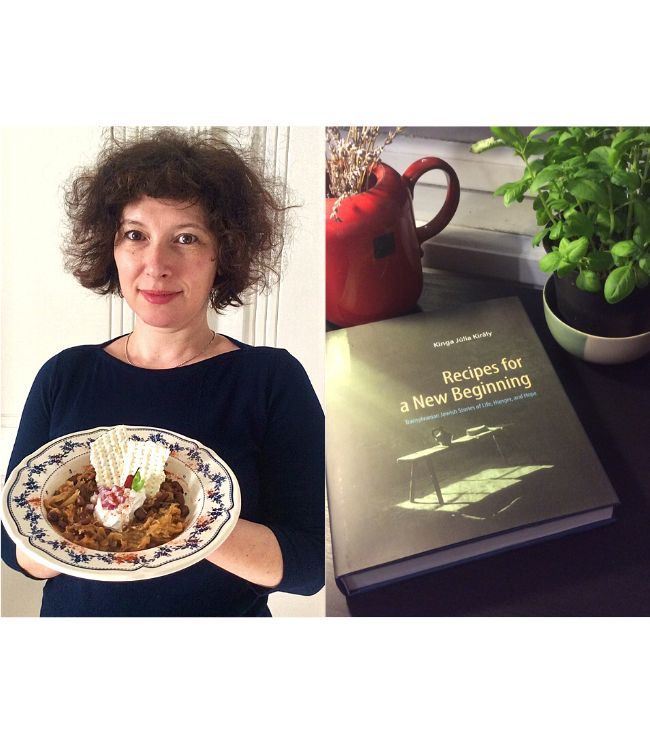 This Community Recipe is Kinga’s Sour Cabbage and Bean Goulash (Kroyt met bundlokh). This Romanian dish was shared with Kinga by Holocaust-survivor Golda Salamon. The base of pickled cabbage and beans is lightly spiced with paprika, to make a simple but intensely satisfying meal.

All about Kinga Júlia Király

Kinga Júlia Király is a writer and literary translator. She graduated in dramaturgy from the University of Arts in her hometown (Marosvásárhely/Târgu Mureș). Kinga is a translator and interpreter of Italian literature. She has published several volumes of novels and short stories.

Kinga lives in Hungary, shuttling between two cities: Budapest and Pécs. She and her husband started gardening during the COVID-19 pandemic and really enjoyed the slowdown in nature. As a writer, Kinga reads a lot. Right now she is enjoying Ali Smith’s Autumn, and Valeria Luiselli’s Lost Children Archive. She also hikes, does yoga, and lots of cooking of course. When there is no pressure, Kinga says cooking is an instrument of joy, fantasy and self expression.

The English edition of Kinga’s book, Recipes for a New Beginning, was published by CEEOL Press in 2020:

“Recipes for a New Beginning. Transylvanian Jewish Stories of Life, Hunger, and Hope is a literary and scholarly work, a cookbook, a cultural dictionary, and a memorial album of Transylvanian Jews. It is a historical summary of the Transylvanian Jewish community’s past 100 years based on 10 in-depth interviews. The author conducted hundreds of hours of interviews and joint cooking with Holocaust survivors. The stories of the interviewees are supported by substantial archival research. Survival and starting anew are in the focus of this readable and gap-filling illustrated book, which conjures up the memories of its contributors ingeniously.”

For cooking inspiration, Kinga’s favorites are:

How was Kinga’s Sour Cabbage and Bean Goulash recipe created?

Kinga found this recipe in Sighetu Marmatiei/Máramarossziget (Romania), the greatest Shtetl in North-Transylvania before WW2. She was there to collect Transylvanian Jewish recipes. The Holocaust-survivor Golda Salamon shared this recipe with Kinga, and now she is sharing it with us.

Sometimes we all need a little inspiration to mix up our regular recipe rotation. Our Community Recipes feature is for just that – to share our favorites and hear from a variety of people in our community.  Since you’ve read Lisa’s, do you feel inspired to share your own recipe? Don’t forget to get in touch to share your vegan recipe too!