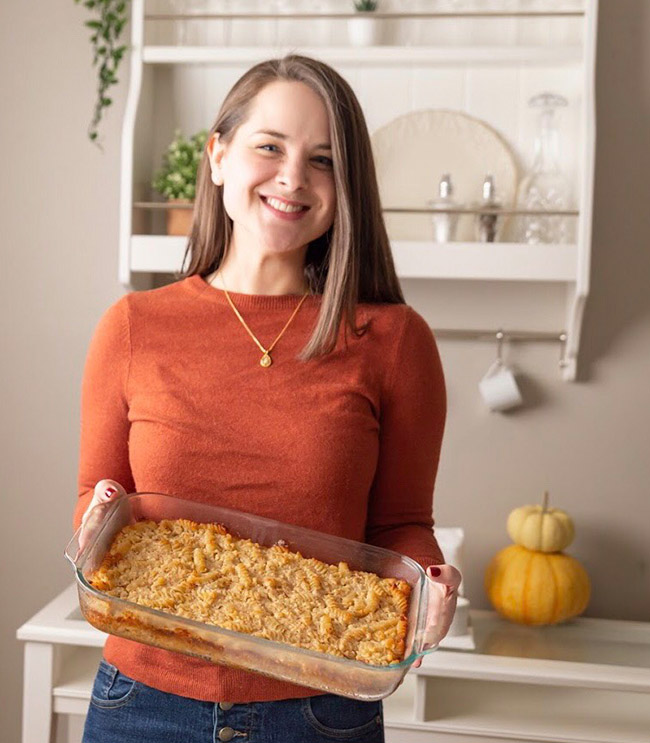 This month’s Community Recipe is Laura Williams’ creamy vegan noodle kugel recipe is a real crowd pleaser. Community Recipes is a recurring feature where I ask a community member to share a vegan recipe with us.

Kugel is a a classic ashkenazi Jewish baked casserole

Noodle kugel is a classic ashkenazi Jewish baked casserole that is normally made with noodles or potatoes and lots of dairy products. Healthier vegan noodle recipes replace the dairy with vegan and plant-based ingredients. The Jewish Food Hero Kitchen’s healthy vegan noodle kugel recipe is a low-fat recipe that features silken tofu and mushroom for a creamy savoury dish.

Tell us about yourself, Laura

I was born and raised in the Metro-Detroit Jewish community. Today, I’m the Director of Cultural Resources at Temple Beth El in Bloomfield Hills, MI where I oversee the synagogue archives and library. I went vegan in 2015. I had been inspired by the documentary “Cowspirarcy” and started doing research about the ethical and environmental impacts of animal-based products. Before going vegan, I was an avid baker and now I’m determined to transform my favorite recipes into delicious vegan-friendly alternatives that don’t lose the nostalgic taste.

The biggest challenge thus far in my vegan baking has been to create a creamy vegan noodle kugel recipe. The vegan kugel never seemed to come out right until recently, when JUST Egg came on the scene. The last piece to the seemingly impossible puzzle was complete. JUST also makes a kosher egg-free mayo that is delicious.

Other vegan dairy substitutes used in this recipe

Alongside the Just Egg, I came across a great recipe for vegan cottage cheese that works perfectly in this Creamy Vegan Noodle Kugel Recipe. The best pasta to use here is either eggless fusilli or eggless cellentani.

Pleasing a tough crowd – my family

After testing many times, this Creamy Vegan Noodle Kugel Recipe has passed the taste test of even the toughest family members to please.

By adapting the recipe used by my family, my Creamy Vegan Noodle Kugel Recipe  holds true as a crowd favorite. This recipe is classic and simple, but there is no offense taken if you add pineapple, corn flakes, or even…raisins. Enjoy!

This plant-based squash dip would be a delicious spread to serve with egg- free challah.

This plant-based kosher for passover apple pistachio cake also makes a good Shabbat dessert especially during the holiday of Passover. This recipe is oil-free and lighter than traditional Passover desserts.

If you like Laura’s recipe, you will love Feeding Women of the Bible, Feeding Ourselves Cookbook, a Jewish female community cookbook.

This is a community cookbook by Jewish Food Hero and is the co-creation of 40 Jewish women. The twenty biblical narratives are contributed by Rabbis, Rabbinical students, Jewish teachers and emerging thought leaders. The forty-one plant-based recipes were developed by professional chefs, homecooks who are elementary school students, and great-grandmothers.

For the Vegan Cottage Cheese (1 ¾ cups):