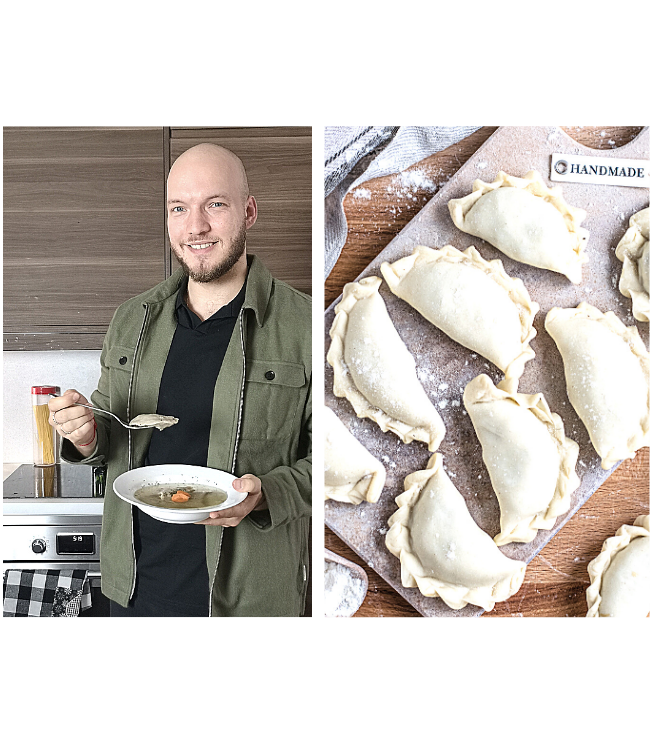 This Community Recipe is Louis’ Vegan Mushroom Kreplers Recipe. A stuffed mushroom vegan dumpling served in a simple and delicious vegetable broth. This dish can be enjoyed on busy weeknights, or dressed up for a special holiday meal.

Kreplers or Kreplach are a traditional Jewish Food. They are small dumplings that are ususally filled with ground kosher meat and mashed potatoes. They can be served alone or in a soup broth.

All about Louis Lavis

Louis is 26 years-old and French and Belgian. He grew up in Luxembourg and then later he moved to Paris. He still lives there today with his girlfriend Elisa, who is also his chief recipe tester. The passion for cooking comes his mum and grandmas and even further back than them. Louis’ great-great-great aunt (…or something like that) was French president Raymond Poincarré’s cook! Louis cooks vegan food from all over the world, and creates many recipes. But what he’ll always prefer is Jewish food, from a warm cholent to a spicy shakshuka!

During his studies, Louis got to travel to Canada and Israel. He’s been a radio host since 2015. For fun, he plays rugby. In recent months, he started to take an interest in Krav Maga. It’s a form of military self-defence. It is highly energetic as it combines techniques from various martial arts, wrestling and boxing!

Cooking in another world

When Louis wants to feel like he’s in his own world, he cooks. For new ideas, he turns to:

Zahav: A World of Israeli Cooking

How was Louis’ Mushroom Kreplers created?

Louis says, “I just love a good broth with stuff that floats in it.” As a result of many trips to Austria, this true passion of his was nurtured. There is no shortage of good broths with stuff floating in them in Austria! Louis created this recipe a bit at a time. For his first step, he replaced the traditional ground meat with ground mushrooms. Next, he added coriander, tarragon and maple syrup. Louis’ Mushroom Kreplers is great as a starter for Shabbat or as a full dish on a cosy Sunday night on the couch.

The smokey flavor is well known and loved thanks to cooking on grills and barbecues, as well as the traditional practice of smoking meats to preserve them. Louis’ Mushroom Kreplers recipe includes a dash of liquid smoke. But you might be wondering what this strange ingredient is! Well, it is a liquid sauce that tastes like smoke. Liquid smoke is made by the high temperature burning of sawdust or chips of hardwood. Condensers collect the smoke and turn it back into an intensely flavored liquid. You can brush it on tofu or vegetables before grilling, use it in salad dressings. Or put a drop in soups and broth - just like in Louis’ Mushroom Kreplers. The important thing is to use it very sparingly, as the taste is extremely strong.

Sometimes we all need a little inspiration to mix up our regular recipe rotation. Our Community Recipes feature is for just that: to share our favorites and hear from a variety of people in our community.  Since you’ve read Louis’, do you feel inspired to share your own recipe? Don’t forget to get in touch to share your vegan recipe too!