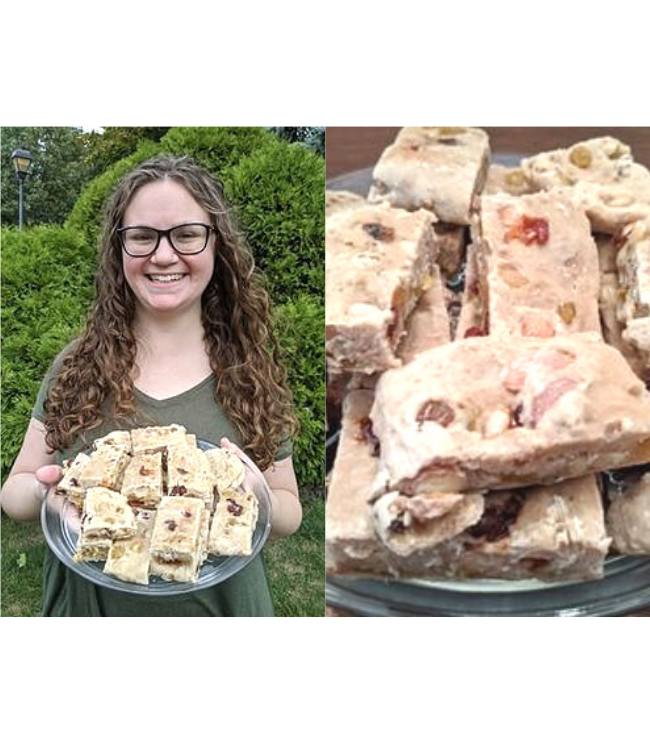 This Community Recipe is Madison’s Vegan Pizza Ebraica Cookies. This Roman Jewish treat is a hard cookie, full of dried fruits, nuts and flavored with wine. Perfect with a cup of tea or coffee, especially dunked!

All About Madison Jackson

Madison Jackson was born in Pittsburgh, Pennsylvania and grew up in Cleveland, Ohio, where she still lives today. She holds a double Bachelors of Art degree in Judaic Studies and English and a minor in History from Binghamton University.

Madison is a lifelong vegetarian (since birth!) and has never eaten meat, fish, or poultry. Her dad is not a vegetarian, but their family home has always been fully vegetarian, so he is a vegetarian in the house. To relax, she enjoys dance classes, which improve her mood and help her forget any worries. At the moment, she takes Ballet, but has also done Modern and Contemporary styles of dance.

A passion for global Jewish life

Madison’s passion for global Jewish life began when she spent a summer as a camper at the Szarvas International Jewish Youth Camp in Hungary, and her interest grew even more when she spent three months living in Warsaw, Poland doing a summer internship at the American Jewish Committee Central Europe office. Madison loves writing and can constantly be found reading about, writing about, and listening to talks about Jewish life, heritage, culture, and practices in different countries.

Madison is currently reading a collection of essays called “From Generation to Generation: Encountering Germany” produced by former participants on a program called Germany Close Up, which brings American Jews to visit Jewish Germany. Madison went on the program in summer 2018. Every two years the program creates a book of essays which are reflections from past participants.

From Generation to Generation: Encountering Germany

For food inspiration, she turns to:

Whenever she cooks or bakes, Madison tries to make a Jewish recipe from a country around the world. This helps her feel connected to her Jewish ancestors who grew up in Eastern Europe, and to the present day Jewish communities that live everywhere. Cooking global Jewish food is fun and helps build a sense of identity. Food is also a great way for participants in the Global Jewish Pen Pal Program to get a glimpse into Jewish life and history in other countries.

Madison first learned about Pizza Ebraica when she attended a session about Roman Jewish food during the 2020 virtual Great Big Jewish Food Fest. She was intrigued by this dessert which has so much history, and is also still part of present day Jewish life in Rome.

In Italian the word pizza is used to mean pie, and Ebraica, which means Hebraic, shows the Jewish origins of the dessert. Pizza Ebraica is commonly found in the Pasticceria il Boccione, a tiny kosher bakery that has run in Rome’s Jewish ghetto for over two hundred years.

These cookies are not known for being pretty, but are known for their satisfying taste. Filled with dried fruits and nuts the recipe is perfect for the High Holiday season. The great thing about this recipe is that you can use any dried fruits or nuts you already happen to have in your cabinet. You can cut Pizza Ebraica when it is still hot out of the oven, or just leave it on the pan for people to break off pieces to eat.

Madison has adjusted Leah Koenig’s recipe for Pizza Ebraica to make it vegan and oil free. The recipe shared here for Madison’s Vegan Pizza Ebraica Cookies is delicious and a healthier version!

Leah’s original recipe is in her book: The Jewish Cookbook

2 ½ cups all-purpose flour, plus more as needed for kneading

Sometimes we all need a little inspiration to mix up our regular recipe rotation. Our Community Recipes feature is for just that – to share our favorites and hear from a variety of people in our community.  Since you’ve read Madison’s, do you feel inspired to share your own recipe? Don’t forget to get in touch to share your vegan recipe too!