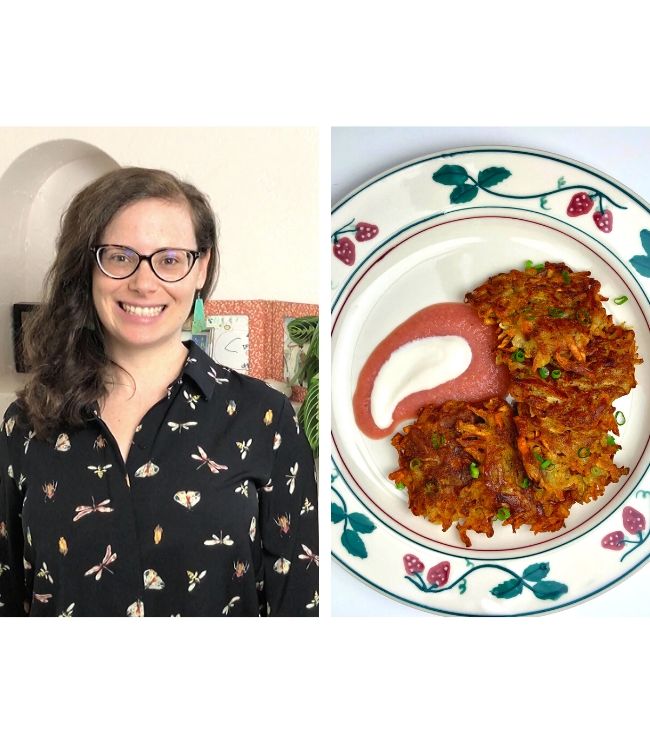 This Jewish Food Hero Community Recipe is Megan’s Seasonal Root Vegetable Latkes – a version of a traditional Jewish recipe served for the Jewish holiday of Hanukkah. Megan’s Seasonal Root Vegetable Latkes are vegan and gluten-free and everyone loves how they taste. You can enjoy latkes at Hanukkah and they also make a delicious addition to dinner throughout the year.  They can be eaten hot or cold with applesauce or vegan sour cream.

Community Recipes is a recurring feature where we share your vegan recipes on the Jewish Food Hero blog.  If you want to share a recipe in this series, pitch us your idea here.

A staple food and a deep history

Latkes are of course the classic Ashkenazi Hanukkah dish. This fried food celebrates the miraculous burning of oil for eight days and nights when it seemed like there was only enough for one. Oil makes latkes a Hanukkah treat. But the potato, the key latke ingredient, is a staple in the Ashkenazi diet in both the old world and all places the diaspora has taken us. Megan’s Seasonal Root Vegetable Latkes are an update on this traditional Jewish food. If you are looking for a baked vegan latke, here are some Mini Baked Parsnip and Sweet Potato Latkes

Megan is the chef who became a vegan. She loved watching cooking shows on TV as a little kid and worked at a bakery and deli throughout high school. Megan grew up in a family that celebrated with food (her mother’s side of the family is Askanazi via Lithuania). It felt inevitable that Megan would go to culinary school and become a chef. After earning a BA in Religious Studies, she graduated from the Culinary Institute of America. Along the way, she became vegetarian and then vegan.

Megan’s professional work has spanned restaurants, catering, hotels, consulting, and retail food. She’s been everything, from prep cook to executive chef and pastry chef. Currently, she works in the corporate grocery world as a prepared foods coordinator.

Early in her  journey, she decided that she wanted to have an organic farm. After going vegan, she dreamed of having a farm with a farm animal sanctuary too. Several years ago, she started to take steps to make this happen. She had been working on veganizing recipes from childhood and merged this project with her goal to provide sanctuary to farm animals. Megan created Mort & Betty’s Vegan Jewish deli, a popup and catering business where 5% of sales are set aside to fund a future sanctuary. The backbones of the menu at Mort & Betty’s are the following client favorites:

Favorite entrees include lox bagels, hot pastrami sandwiches, a knish boreck hybrid, corned beet reuben tacos, to name a few. Megan is constantly updating and expanding Mort & Betty’s and looking forward to doing more later this year.  If you want to take a look at their delicious vegan Jewish deli food, take a look at their Instagram account photos.

Megan’s Seasonal Root Vegetable Latkes are easy to prepare, flavorful, and customizable based on the season and personal taste. They are part classic and part fancy. Great for gatherings, they can be served traditionally with applesauce and vegan sour cream. Or can be dressed up with carrot lox, black lentil “caviar”, and chives. To make these latkes appropriate for Passover, matzo meal can be used in place of garbanzo flour.

About 12 years ago, Megan’s birthday (December 20) landed during Hanukkah. She was planning to have friends over and at that time, her friends worked in the restaurant industry. Wanting to impress them, Megan jazzed up the traditional recipe by adding in some seasonal root vegetables – parsnips, leeks, beets, sweet potatoes. This impromptu recipe became Megan’s Seasonal Root Vegetable Latkes. It was a hit and ever since, Megan always substitutes some of the potatoes with whatever root vegetables are in season.

Russet potatoes are what makes a latke a latke, only slightly outshined in importance by the oil for frying. Russets are key because of their starch content. Red and yellow waxy potatoes won’t have the right texture or enough starch. It’s also important that no more than 50% of the total volume of vegetables are the seasonal vegetables.

Speaking of seasonal veggies, anything goes. Megan has made this recipe with cooked sweet corn, fresh zucchini in the summertime, and of course a variety of root vegetables in colder months. The strawberry applesauce is a nice variation for spring. Plums or peaches are beautiful and delicious for summer, and persimmon is an absolute favorite in the fall.

Ground Flaxseed is a common egg replacer in vegan recipes. Usually a recipe advises to make a “flax egg” with flaxseed meal and water. Instead, Megan adds the flaxseed meal directly to the shredded vegetables. This is because, after being shredded and adding salt, veggies exude moisture. The flaxseed will absorb all that wetness and not need any added liquid.

Using a neutral tasting oil like sunflower oil is best for frying. It has a pleasant nutty flavor without tasting at all like sunflower seeds. It has a high smoke point, meaning it does not break down at high heat.

Everyone loves these latkes! Most people are pleasantly surprised at the addition of seasonal vegetables and no one seems to miss the eggs. Gluten free folks love the addition of chickpea flour. They are a crowd-pleaser!

Sometimes we all need a little inspiration to mix up our regular meal rotation. Our Community Recipes feature is for just that – to share our favorites and hear from a variety of people in our community.

Here are some more recipes you may enjoy:

Kira’s Almond Butter Oatmeal Cookies. These gooey, chewy cookies are oil-free, refined sugar-free, and made from all natural ingredients. Made with oats and fruits, they are a filling and healthy go-to snack.

Laura’s Creamy Vegan Noodle Kugel – Sometimes the classics are the best, but we need a little twist to liven things up. Try Laura’s recipe for a plant-based version of an old favorite.

Dreidel Game Guide: This is a easy to read printable Hanukkah dreidel rules and illustration.This download includes: rules of the game and dreidel illustration. Each sheet has 4 copies that can be cut out and shared with dreidel participants.