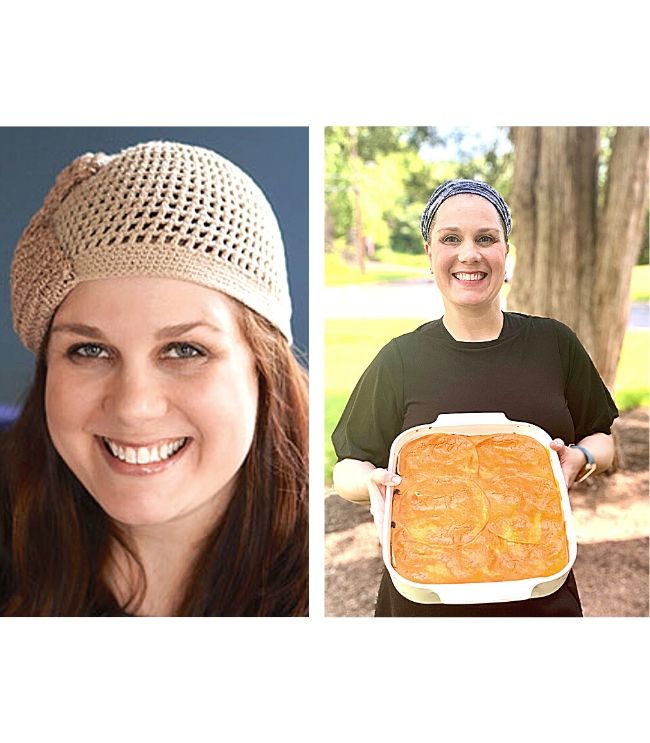 This Community Recipe is Natasha’s Surprisingly Vegan Enchilada Casserole. Enchiladas are a Mexican dish of tortillas wrapped around a filling of meat, beans or vegetables. They are arranged in a dish and covered with a chili tomato sauce before being baked. This casserole version basically takes all the delicious ingredients of enchiladas and arranges them in layers like a lasagne. What’s not to love?!

Community Recipes is a recurring feature where we share your vegan recipes on the Jewish Food Hero blog.  If you want to share a recipe in this series, pitch us your idea here.  This series is all about sharing healthy plant-based and vegan recipes. We are creating a positive community around food and sharing.

All about Natasha Nadel

Natasha is from Chicago and currently lives in Potomac, MD with her husband and their two children. Natasha is a vegan chef, educator, and author. She wrote The Healthy Family, Healthy You Cookbook and The Healthy Mama’s Guide to Feeding your Family Well. Her mission is to help people eat more plants. She wants to create a new future where Jewish life builds us up spiritually and physically. You can see how she does that via the delicious food she shares on her Instagram and Twitter.

Natasha loves figuring out how to veganize (and healthify!) dishes she enjoyed before becoming vegan. Just like this recipe for her Surprisingly Vegan Enchilada Casserole! However, Natasha knows that not all vegan foods are equal. She says, “whenever I see a recipe that starts with creaming (even vegan) butter and sugar, I simply walk away. To me that’s just not in the spirit of what I do or who I am.”

From listening to reading

Prior to having kids, Natasha used to read for 3 hours a day! Post-kids, she keeps up with the latest vegan doctors, authors and other books via audiobooks. She loves to listen to podcasts about politics, behavioral economics and positive psychology while she cooks. She says that cooking is her meditation, it gives her focus and calm and she can absorb herself in it for hours.

Committed to the younger generation

Aside from community workshops, Natasha also teaches healthy cooking to middle schoolers at a Jewish Day School and teaches camps at her house in the summer. She is a big supporter of Friendship Circle, having worked with them for 5 years and walked the Miami half marathon to raise money for them 4 years in a row.

Natasha is dedicated to building community and wants the Jewish community to build both mental and physical health. She says, ‘We should all experience hosting and being hosted where we feel full and satisfied, but not guilty, ashamed and “ungestuffed.”’

How was this recipe created?

Before becoming kosher and vegan, Natasha would go out to eat Cheese Enchiladas once a week. Keeping kosher meant stopping going to the Mexican restaurant. Then she became vegan and all that gooey cheesiness was really over. This was also in the time before people started making so many vegan cheese options. So, she came up with her own recipe made from whole foods.

This enchilada casserole has almost caused heart attacks. Other people eating meat at a shabbat or yuntov meal were sure that Natasha had given them something dairy at the same time.

Shira’s Vegan No-Bake Cookie Dough Squares. These treats are so simple to make. Make them for a yummy snack, dessert, breakfast, or even crush them up and serve on top of some non-dairy yogurt or non-dairy ice cream!

Michelle’s Hearts of Palm and Mandarin Crunchy Noodle Bowl. This is a big, bright bowl of vibrant salad greens, succulent palm hearts and soft juicy mandarin pieces. With creamy avocado and topped off with a generous handful of crunchy, curly salad noodles. A lime honey dressing wraps this Asian inspired dish together.

Irit’s Salty and Sour Marinated Zucchini Concia is a Roman Jewish fried zucchini dish. After browning in a hot pan, zucchini slices get their flavor from garlic, herbs and salt. A vinegar marinade gives this dish an intense flavor, drawing out the natural sweetness of the zucchini. Perfect as a vegetable dish for any table, and leftovers make any sandwich sing.

for the Vegan Cheese Sauce:
1 cup cashews, soaked in water for at least an hour