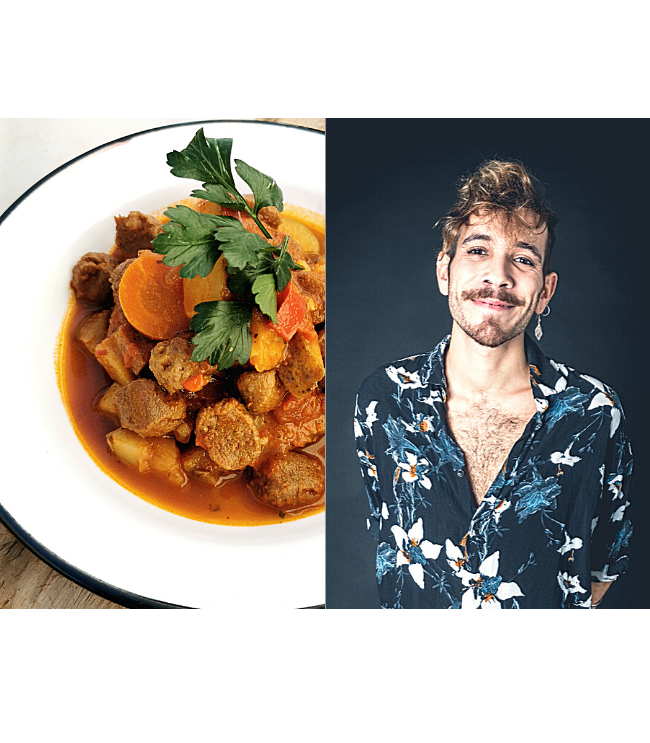 This Community Recipe is Nimi’s Savta’s Vegan Goulash Recipe. This is a vegan take on a Hungarian classic soup or stew of meat and vegetables. Nimi’s version is a gently spiced, rich tomato-based vegetable stew with chunks of soy protein. Serve as it is, or with a whole grain or fresh bread as a side.

Nimi was born and raised in Tel Aviv Israel. In March 2019, he and his husband Kristóf decided to make a change and start a new life. These days they are living in a tiny seaside village in the countryside of the Greek Peloponnese region.

In Israel, Nimi used to work as an actor for Habima Theater in Tel Aviv. Moving away from Tel Aviv meant leaving this job. Nowadays, Nimi writes for several online magazines, mostly about human and animal rights.

From omnivore to vegetarian to vegan

Nimi turned vegetarian when he was 12 years old. He was in the car with his father and got stuck in a traffic jam for hours. Right in front of them the whole time was a huge truck full of chickens. Since that day, he never ate meat again.

At 24 years old, Nimi decided to turn vegan. He felt this was a necessary decision, and regretted how long it took him to decide.

Kristóf, Nimi’s husband, is a vegan chef. They were both vegan before meeting, and previously Nimi had had no interest in cooking. But when he fell in love with Kristóf, he also fell in love with creating and enjoying food.

Nimi loves Kristóf’s cookbooks! “Kristóf Kitchen” (half Hungarian & half English language) is one of Nimi’s favorites. Kristóf’s way of cooking, creating flavors and textures, as well as his way of telling the story behind a recipe, is something Nimi really appreciates.

The Greek cuisine is fabulous and very friendly to vegans. Lots of delicious Greek dishes are based on plants, a variety of different vegetables, beans and nuts. Nimi’s absolute favorite dish is the legendary Greek fava. This dish is made from mashed yellow split peas, mixed with the fresh flavors of olive oil, garlic and lemon.

Nimi used to call his grandma many different nicknames, but the best one was simply Savta, which means ‘grandma’ in Hebrew. Here is what Nimi told me about his Savta:

“My grandmother, a Holocaust survivor from Auschwitz Birkenau camp, immigrated to Israel, back then British Mandate of Palestine, in 1946. At this time, she had already lost her entire family. I remember as a child she used to tell me that in the first few years after the war people looked at her like she was a crazy person who came “from there”. She used to wear only long shirts, trying to hide the number on her arm, and she did everything to try to fit in.

When I was 10 years old I asked her to come to my class in school on Holocaust memorial day and to talk about what she had been through. She was so shocked that I was not ashamed of her. I tried to explain that there is nothing I am more proud of than her in this life.

My grandmother was born in Transylvania – Romania, once part of Hungary, and the biggest thing she learned from her parents besides the love for human beings was the love for traditional Hungarian cuisine. I grew up eating all the typical Hungarian food my grandma used to make for me. When I was 12 and I turned vegetarian she was in a bit of trouble, knowing that Hungarian food involves a lot of meat. But she said, “The main thing is that you do what makes you feel good.”

My grandmother Zsoka, passed away eight years ago at the age of 85. She left behind many people who adored and loved her, and who will continue to love and admire her for the rest of their lives.”

If you want to see Nimi’s Savta, you can find her in the movie “Numbered” on Netflix.

Nimi’s partner Kristóf is Hungarian (just like Nimi’s Savta), and he said it was the best Goulash he ate in his life. Nimi was happy to receive this compliment, but he knew that he only said because he never tasted Nimi’s Savta’s Goulash.

A pinch of turmeric

A pinch of cumin

A pinch of coriander (fresh or dried)

A pinch of salt

A pinch of black pepper

Sometimes we all need a little inspiration to mix up our regular recipe rotation. Our Community Recipes feature is for just that – to share our favorites and hear from a variety of people in our community.  Since you’ve read Nimi’s, do you feel inspired to share your own recipe? Don’t forget to get in touch to share your vegan recipe too!