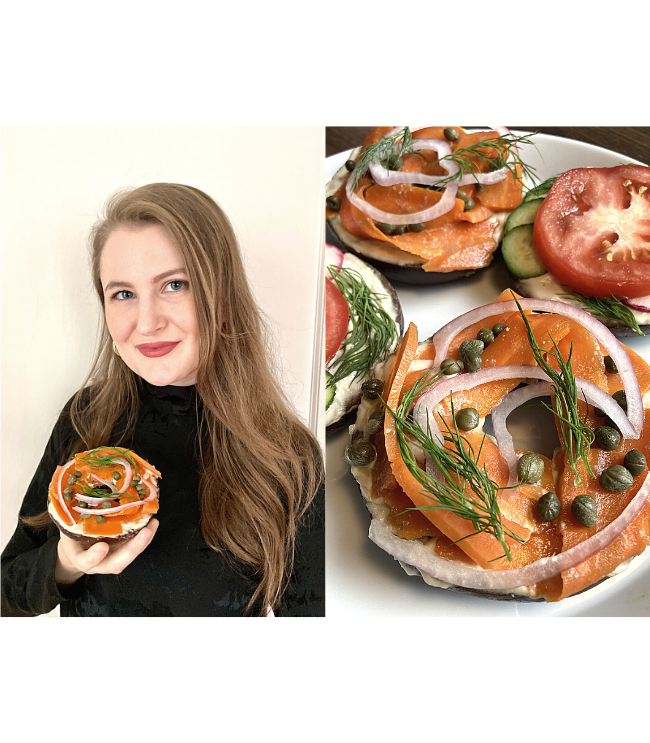 This Community Recipe is Rachel’s Vegan & Oil-Free Carrot Lox. This is a plant-based take on salty brine-cured salmon, usually served with cream cheese bagels. In this recipe, ribbons of lightly steamed carrots are steeped overnight in an intensely flavored whiskey-based marinade. Serve on top of bagels with a creamy cashew nut spread.

All about Rachel Hershkovitz

Rachel Hershkovitz lives in Seattle’s Capitol Hill neighborhood and works for PETA as a social media correspondent. Before Seattle, she lived in Las Vegas with family. Rachel has one sibling, Bebe, who’s also her best friend.

Rachel’s mother, who went vegetarian when Rachel was a teenager, always emphasized the importance of respecting the autonomy and feelings of animals. Since she’s a great admirer of her mother’s independent-mindedness, Rachel naturally followed her footsteps.

When she was a teenager, Rachel protested with animal rights activists against KFC. She still remembers the horror she felt after a passerby threw a rubber chicken at her!

Shortly after a vegan Rosh Hashanah meal in Jerusalem, replete with date syrup instead of honey, Rachel felt inspired enough to make the leap to vegan.

Rachel always loved to cook. When she started cooking vegan food, she felt she started to respect fruits and vegetables in a new way. The challenge of finding inventive new ways to make foods taste the way she remembers is the biggest joy and source of creativity in her life. Rachel feels that vegan cooking is never passive, always an adventure.

For inspiration, Rachel turns to:

There are many mock-lox recipes out there. But, whenever Rachel tried them, she felt unsatisfied. Most recipes require oil, which provides sheen but doesn’t impart much flavor. Even more so, many include aggressive tastes uncharacteristic of lox, like paprika, nutritional yeast, and soy sauce.

Rachel’s recipe is oil-free and tastes just like the real deal—finally. As Rachel says, “A Jew would know!” Mellow, umami-rich, smoky, slightly sweet, flaky, and delicate. You’ll want to use this marinade for just about anything. But Rachel’s absolute favorite way to serve her Vegan & Oil-Free Carrot Lox is on top of a bagel, with a Rachel’s cashew schmear underneath.

Sometimes we all need a little inspiration to mix up our regular recipe rotation. Our Community Recipes feature is for just that – to share our favorites and hear from a variety of people in our community.  Since you’ve read Rachel’s, do you feel inspired to share your own recipe? Don’t forget to get in touch to share your vegan recipe too!