Why A Jewish Woman Studies Jesus and The New Testament 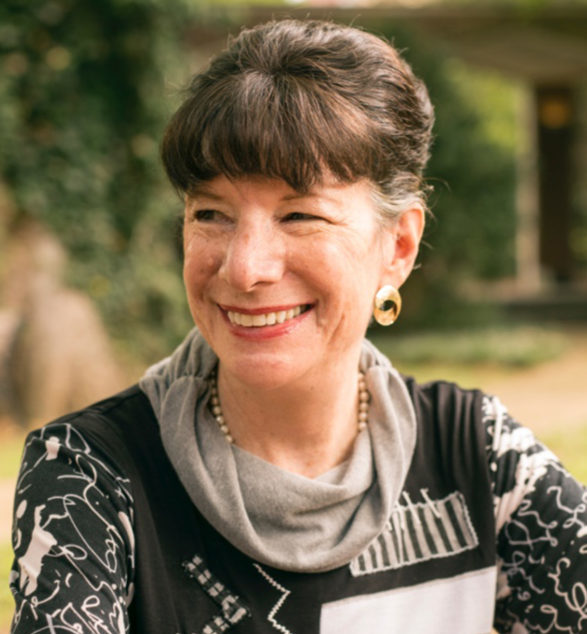 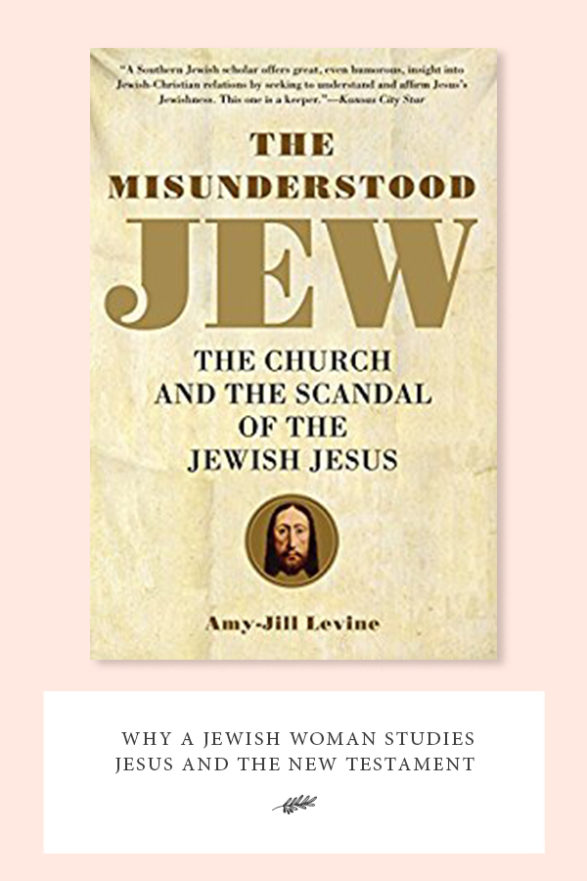 Two years ago, I was searching for Jewish ideas about Jesus for two reasons:

First, my daughter had returned home from school one day with the question “Who is Jesus?” and I did not know what to say.

Secondly, I wanted a skillful way to respond to questions posed by well meaning Christians about what Jewish people think about Jewish.

So I did some research online and found the book The Misunderstood Jew: The Church and the Scandal of the Jewish Jesus by Amy-Jill Levine.

For those of you unfamiliar with Amy Jill Levine, she is a self-described Yankee Jewish feminist who teaches New Testament in Nashville, Tennessee, the buckle of the Bible Belt.

Levne is a prolific writer. See the long list of her books at the end of this post. When she is not writing, she is knitting to relax and refresh herself (especially during faculty meetings).

It’s with great honor (and excitement!) that I share this interview with Amy-Jill Levine.

Who has influenced you in your life?

The most influential person in my life was my mother, who died a month before I accepted the invitation to leave Swarthmore College and move to Vanderbilt. My mother graduated university in 1933, at the height of the Great Depression. She wanted to do graduate studies, but her family encouraged her to return home and get a job, so that they would have enough money to get her two brothers through medical school. She went to work, married, struggled with infertility and finally at age 44 had one baby, me. Knowing what it was like not to be able to fulfill her educational goals, she made sure that her little girl would not face the same difficulties. She encouraged my academic interests and modeled for me what good parenting looks like. After my father died, when I was still quite young, she also taught me how to succeed as a woman in a world where women, and widows, were not expected to have professions outside the home.

Why did you write The Misunderstood Jew: The Church and the Scandal of the Jewish Jesus and what do you want people to learn from it?

Misunderstood seeks to show how Jesus, a first-century Jewish teacher, is part of Jewish as well as Christian history. It points out where, in some Christian interpretations, Jesus is incorrectly depicted as against Judaism; in such interpretations, anti-Jewish views are introduced and then reinforced. Thus, the book shows that Christians do not need to make Judaism look bad in order to make Jesus look good, and it shows Jews how Jesus fits into his own Jewish context.

Why did you choose to focus your career on Christianity and New Testament?

The two areas where I work are Jewish-Christian relations and the Bible, Gender and Sexuality. I’ve seen the Bible deployed too many times to hurt people. As the cliché goes, the Bible should be a rock on which one stands rather than a rock thrown to do damage.

How has your research into Jesus, Christianity and the New Testament influenced your Jewish spirituality?

I’m not a particularly spiritual person (although a number of my friends disagree with my self-perception). I find myself thinking more about history and literature than about theology, about ethics rather than about a divine presence in the world. However, in studying the New Testament, I have become a better Jew: I have learned more about Jewish history, Jewish discussions of Torah, the role of the Pharisees, the importance of the Temple. It’s one of those ironies of history that the only Pharisee from whom we have written records is Saul/Paul of Tarsus, and the first person in literature ever called “rabbi” is Jesus of Nazareth.

You describe yourself as an unorthodox member of an Orthodox congregation. What does this mean to you?

I am a member of Congregation Sherith Israel, an Orthodox shul in Nashville. However, I do not keep kosher, I am not shomer Shabbos, and I don’t always light candles on Friday night – often because I’m in a hotel for a church-based scholar-in-residence program. The congregation is my home: the people, the Torah study, the services, the community outreach, etc., all sustain me. Saying the same prayers I recall my parents saying connects me to my past; hearing my son daven shacharit in the shul when he is home reinforces this connection.

Do you think Jewish parents should talk to their children about Jesus? If so, what should they say?

If children ask, Jewish parents can explain how Jesus was a Jewish teacher, and that his followers, who are today called Christians, see him as more than a teacher. They see him as divine.

The most important thing is that parents first give their children a strong grounding in Judaism: history, ethics, theology, and practice.

In your experience, what do Jewish people think about Jesus? Do they have many misconceptions?

Jews have misconceptions about Jesus and about Christianity in general; Christians have misconceptions about Jews and Judaism. It seems to me that if we Jews want our neighbors to respect us as Jews, which means knowing something more about Judaism and Jews than the Shoah, Middle Eastern politics, Hanukkah, and “Fiddler on the Roof,” we Jews should know more about Christianity than Santa Claus, the Easter Bunny, and the history of Christian antisemitism.

How should Jews answer Christians who ask about the Jewish view of Jesus?

There is no singular “Jewish” view of anything; Jews do not have a head Jew telling us what to believe or how to practice. Jews should provide the answer that best works for them, but to do so, Jews should learn about Jesus in his Jewish context. My various publications:

The Misunderstood Jew: The Church and the Scandal of the Jewish Jesus

Short Stories by Jesus: The Enigmatic Parables of a Controversial Rabbi

– speak to such questions.

What are the similarities and differences between Jewish feminism and Christian feminism?

There are multiple definitions of ‘feminism’; generally, feminist approaches seek to promote human flourishing in all forms, with special attention to issues of gender and sexuality. Some Christian feminists still argue that early Judaism was a hopelessly misogynist system in which women were oppressed, suppressed, repressed, and consequently depressed, and these women rejected their Jewish identities by joining the Jesus movement. This is a misconception of early Judaism and of Jesus. Indeed, the New Testament is a wonderful source for Jewish women’s history: we find Jewish women owning their own homes, worshiping in synagogues and the Jerusalem Temple, having freedom of travel, having access to their own funds, serving as patrons, etc. Jesus had women patrons; so did other Jewish movements at the time, including the Pharisees. Christian feminists will sometimes look for a Jesus who represents liberation; my concern is that they not use Judaism as a negative foil in order to arrive at this portrait.

For men and women who want more resources on this topic, what 3 books would you recommend?

The Jewish Annotated New Testament, 2d edition (New York: Oxford University Press, 2017) by Amy-Jill Levine and Marc Z. Brettler (eds.).  the full New Testament, annotated by Jews, and close to 50 short essays, also by Jews, on the history of the New Testament period, Jewish understandings of Jesus, Mary, and Paul over time, and other matters that explain Christian texts and diversity of beliefs.

The Misunderstood Jew: The Church and the Scandal of the Jewish Jesus  (New York: HarperOne, 2006) by Amy-Jill Levine,: how Jesus fits into his Jewish context, and how false and toxic views of that context, promoted by numerous Christian teachers and preachers, deform the image of Jesus and prompt anti-Jewish views.

Short Stories by Jesus: The Enigmatic Parables of a Controversial Rabbi (New York: HarperOne, 2014) by Amy-Jill Levine, : shows how Jesus’ parables – the Prodigal Son, the Good Samaritan, etc. – are Jewish stories that make sense in Jewish ears; it also shows how Christians, over the centuries, have often incorrectly read these stories in light of false and negative stereotypes of Jews and Judaism.

Also, the noted children’s book author and Rabbi Sandy Eisenberg Sasso and I are writing a series of children’s books about Jesus’ parables. These volumes should help prevent Christian children from developing anti-Jewish prejudice; they also allow Jewish parents, if they want, to introduce their children to stories told by Jesus, just as they might introduce their children to Buddhist stories, stories from indigenous and aboriginal peoples, etc. A note to parents and teachers explains why two Jews are telling stories from the New Testament.

Thank you Amy-Jill Levine for sharing your thoughts and wisdom with us. I will remember your words “Ignorance never helped anyone.” Reading your book has helped me talk with my daughter about Jesus and also to answer Jesus questions from my Christian neighbors.

Your turn: What did you learn from reading Amy-Jill Levine’s  interview?

The Misunderstood Jew: The Church and the Scandal of the Jewish Jesus

The Meaning of the Bible: What the Jewish Scriptures and the Christian Old Testament Can Teach Us (with Douglas Knight);

The New Testament, Methods and Meanings (with Warren Carter), and

Short Stories by Jesus: The Enigmatic Parables of a Controversial Rabbi

With Rabbi Sandy Eisenberg Sasso, she co-authored the children’s books

Who Counts? 100 Sheep, Ten Coins, and Two Sons and